At https://www.adventurebox.com/maker users can easily make their own games. All interfaces are fully graphical. No programming or scripting is required. The only text a user will write is dialogue for the characters the user creates. 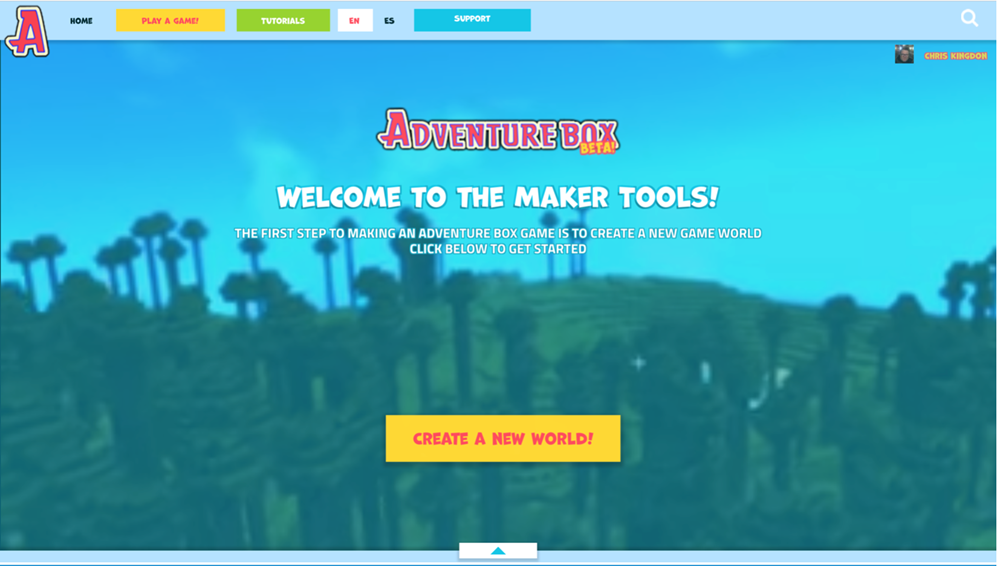 A game maker first creates a world. Worlds can be created in several different ways. 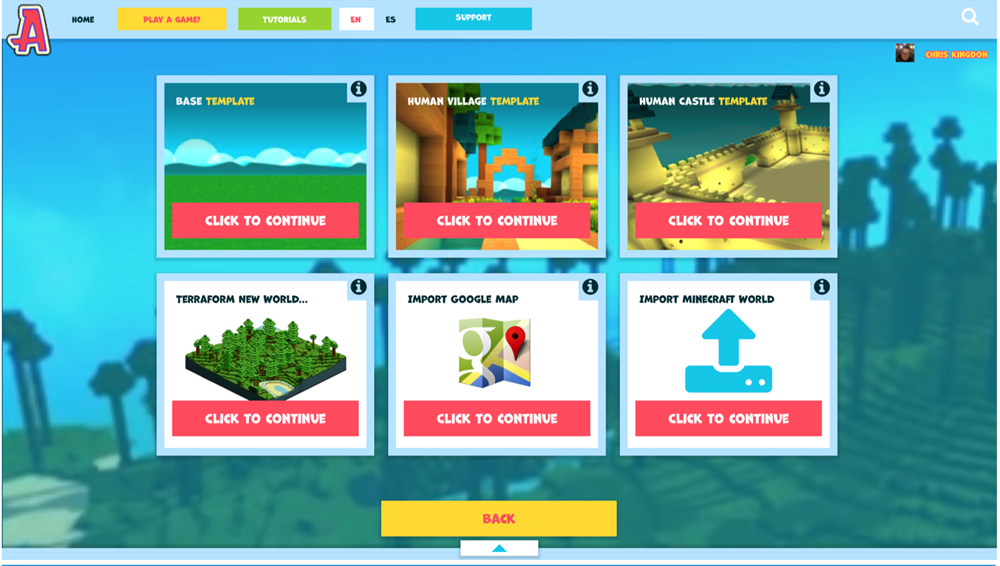 The simplest type of start world is a flat world. Such worlds leaves total creative space to the user to create any type of world.

The opposit are template worlds containing, for example, a ready made village or castle to make it easier for the user to get started.

The terraform options allows the user to set certain criteria, such as temperature and amount of hills and water, and then to autogenerate a randomly created world based on the users selections.

Worlds can also be created from Google maps. The user selects the part of the world that interests them and Adventure Box creates a 3D map of land and water as selected. The 3D map accurately models hight and depth curves provided by Google maps. Roads and street names will be added to the models to simplify orientation when users zoom in to a neighbourhood.

Users can also import worlds they have created in Minecraft. Minecraft is another popular Swedish computer game that allows their users to create random worlds and within those worlds build with virtual Lego blocks (voxels). Since Minecraft is a downloaded games sharing what one has created is difficult. Since it is now possible to import Minecraft creations into Adventure Box Minecraft, creations can now easily be shared as Adventure Box games. This has the added benefit of that game logic, such as characters, quests and triggers, which can be added to otherwise static Minecraft creations. 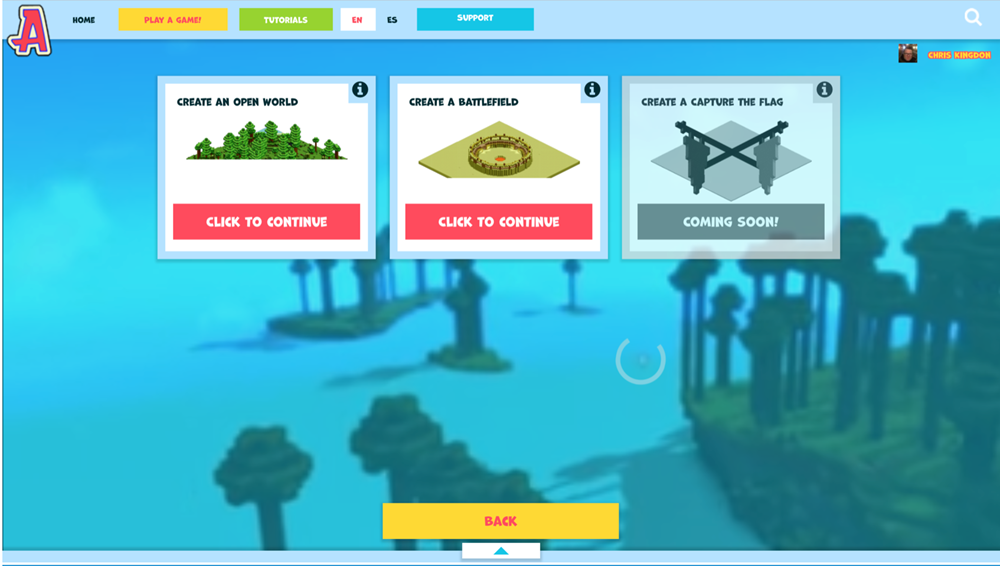 Different game types are supported. Currently users can chose between creating open world role playing games, in which a player solves quests, and battlefield games in which players battle each other. Several other game types will be introduced. Capture the flag is a concept in which teams of players play against each other with the simple objective of catching the other teams flag.

Once a world has been generated the maker can edit the world in multiple ways. Either the user modifies the world, block for block as in the image below. Because the Adventure Box engine is highly optimized big chunks of many blocks can be edited simultaneously. This is not possibly in other voxel engines, not even in downloaded applications editing voxels. 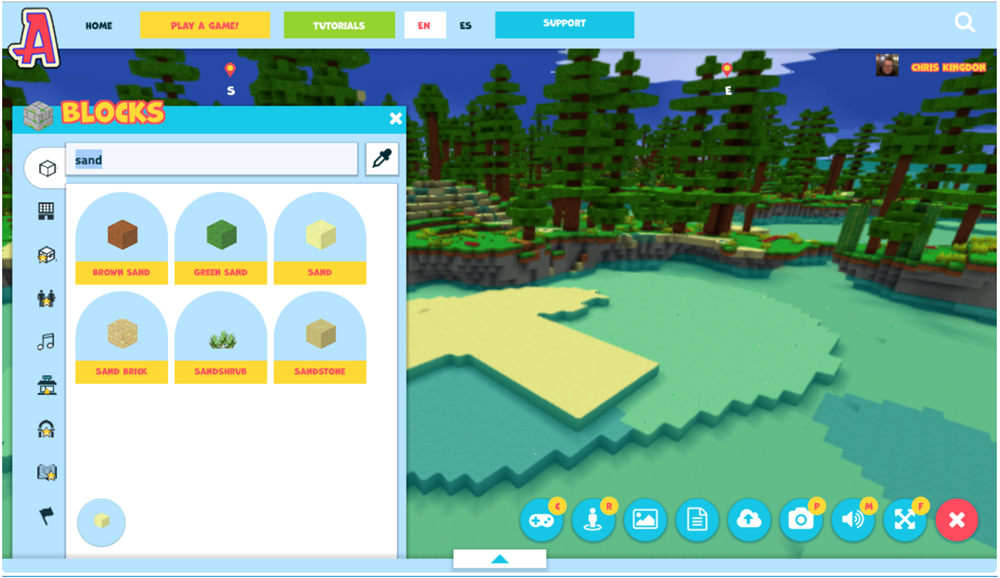 It is quicker for the user to build with ready made objects such as trees, buildings, roads, vehicles and hills. 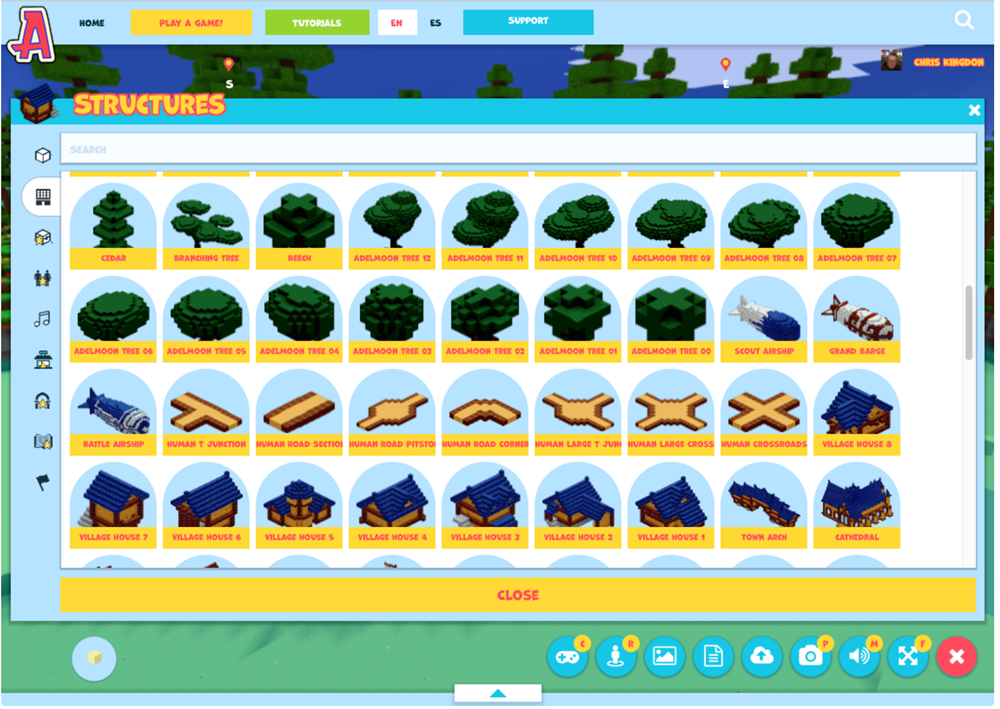 There are multiple smaller objects to choose from, such as furniture, portals, signs, buttons to set of triggers and prices for those who complete quests. 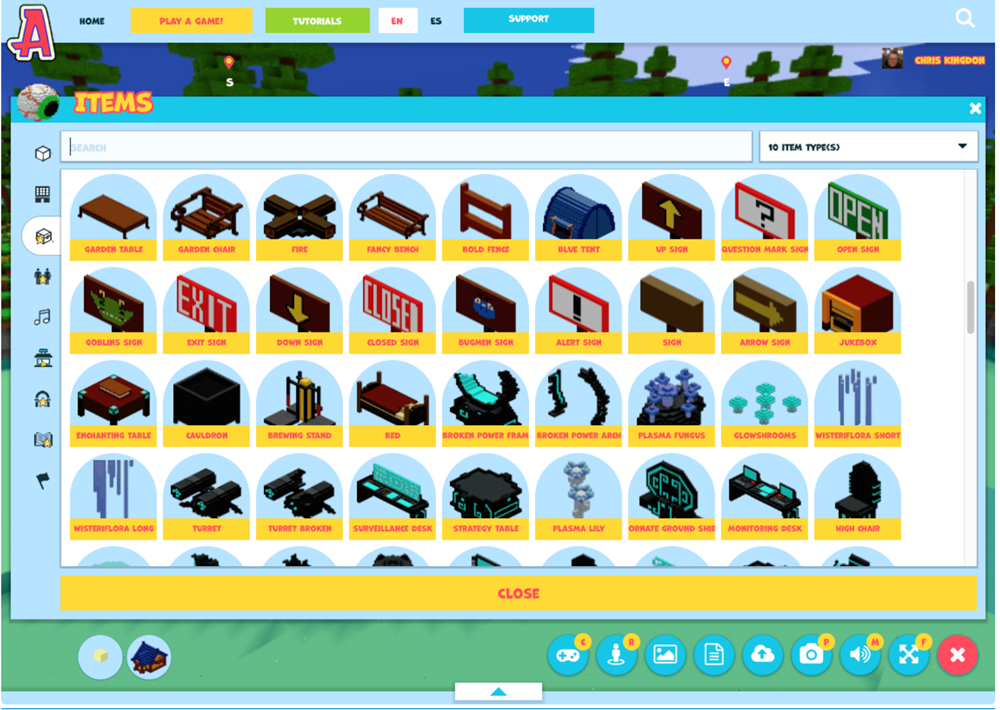 Once the maker has built the static world to their content it is time to add dynamic game elements such as characters with dialogue and behaviors, triggers and quests.

Characters are created by selecting type and gender and selecting color, clothing and equipment. 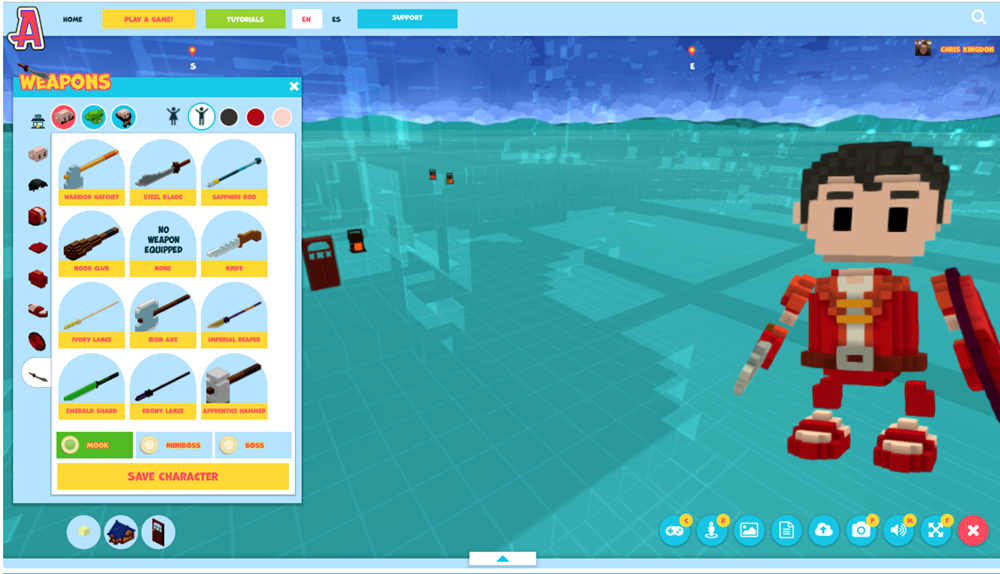 Once a character is put into a world it can be graphically programmed in several ways. Dialogue trees can be built. Characters can be set to be hostile or friendly. Characters can be invisible until a certain trigger condition occurs. Triggers and quests can be linked to the character. The character can be given its own objectives. 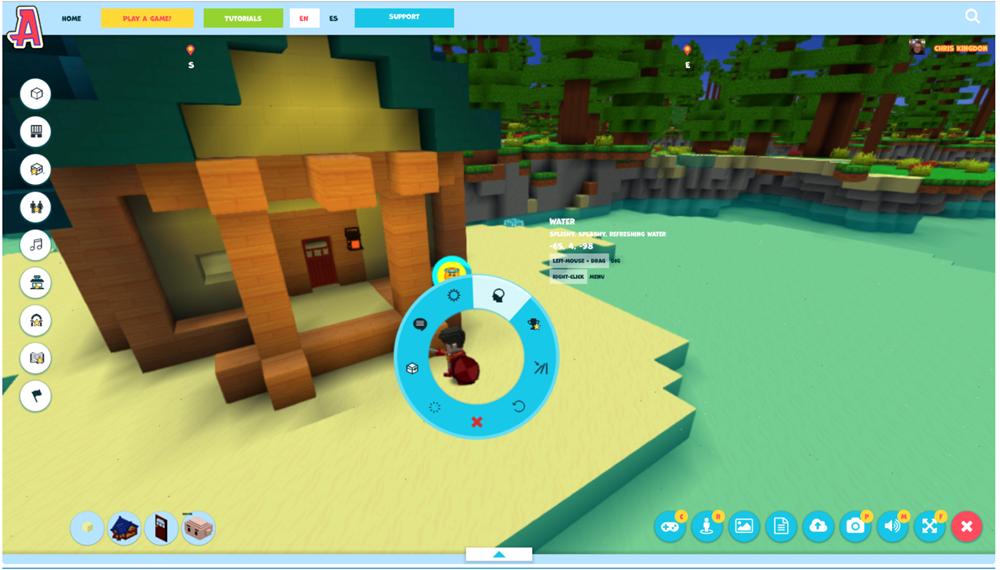 When a maker completes their game they can publish it on the Adventure Box sharing page https://www.adventurebox.com/player where each game is represented by a thumbnail image. Each month we appoint a winner, the Maker of the month, whose game has received the most plays. Popular games receive thousands of plays. 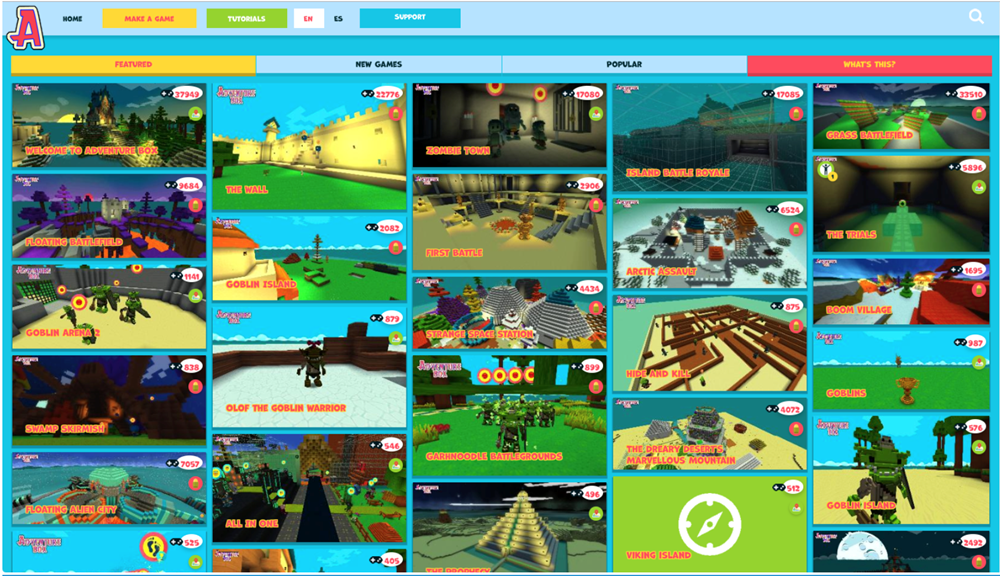 It is easy to promote a game by sharing the link in social media, online forums or game web sites. One can even embedd a game one a web page the same way as one can embed a youtube video.

Players grade games and leave comments on the game. 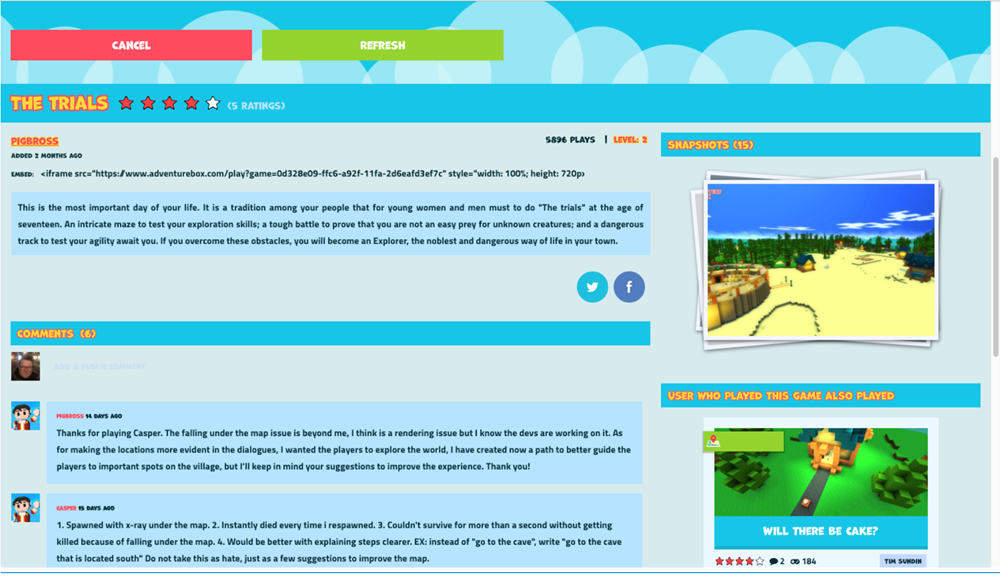